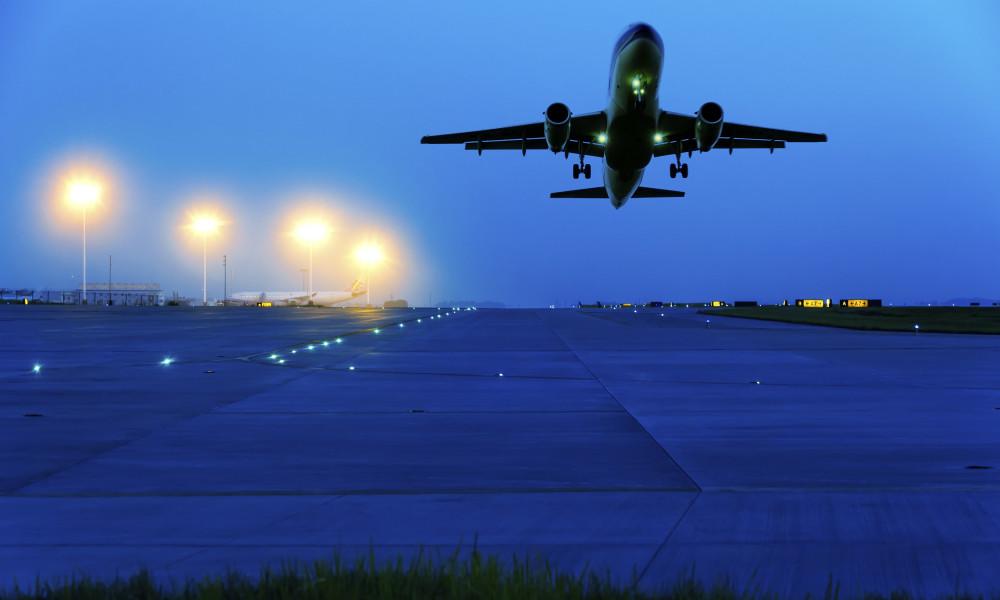 Although the American aviation industry is working to recover, April 2020 told a story of two extremes according to government data. The month set records for the fewest number of scheduled flights, and the highest number of flight cancellations – all directly tied to the COVID-19 pandemic.

Airlines set three records in April, and neither of them showed positive signs for recovery in the aviation sector. The U.S. Department of Transportation Bureau of Transportation Statistics (BTS) released their latest airline data, showing domestic carriers set new records for cancellations and scheduled flights.

Due to the COVID-19 pandemic, travelers have been staying at home and avoiding unnecessary travel at all costs. As a result, the airlines reported record losses of $900 million or more during the first three months of 2020. While they are using health screenings and mandatory face mask usage to encourage passengers to book flights, government data suggests that the recovery isn’t going quite as planned.

At the start of April 2020, America’s carriers had around 18,000 flights scheduled daily. Even with a number of those cancelled, airlines were operating around 8,000 or more every day. As the month progressed, that number significantly decreased to a low of over 6,000 flights operating on a schedule of around 10,000 flights. 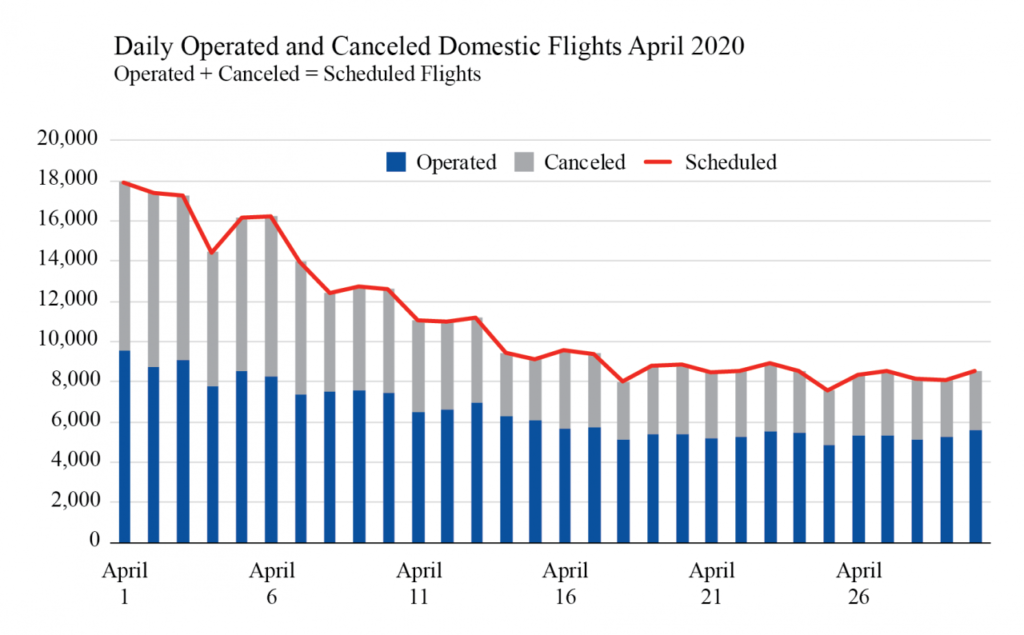 Compared to “normal” numbers, April experienced a sharp decline in scheduled flights. Over the last 12 months, domestic airlines scheduled over 718,000 monthly flights at their height in July 2019. Even in March 2020, when the United States began their response to the novel Coronavirus pandemic, U.S.-based carriers scheduled over 700,000 flights. But as lockdown and semi-quarantine became the temporary normal, flight schedules were cut nearly in half. 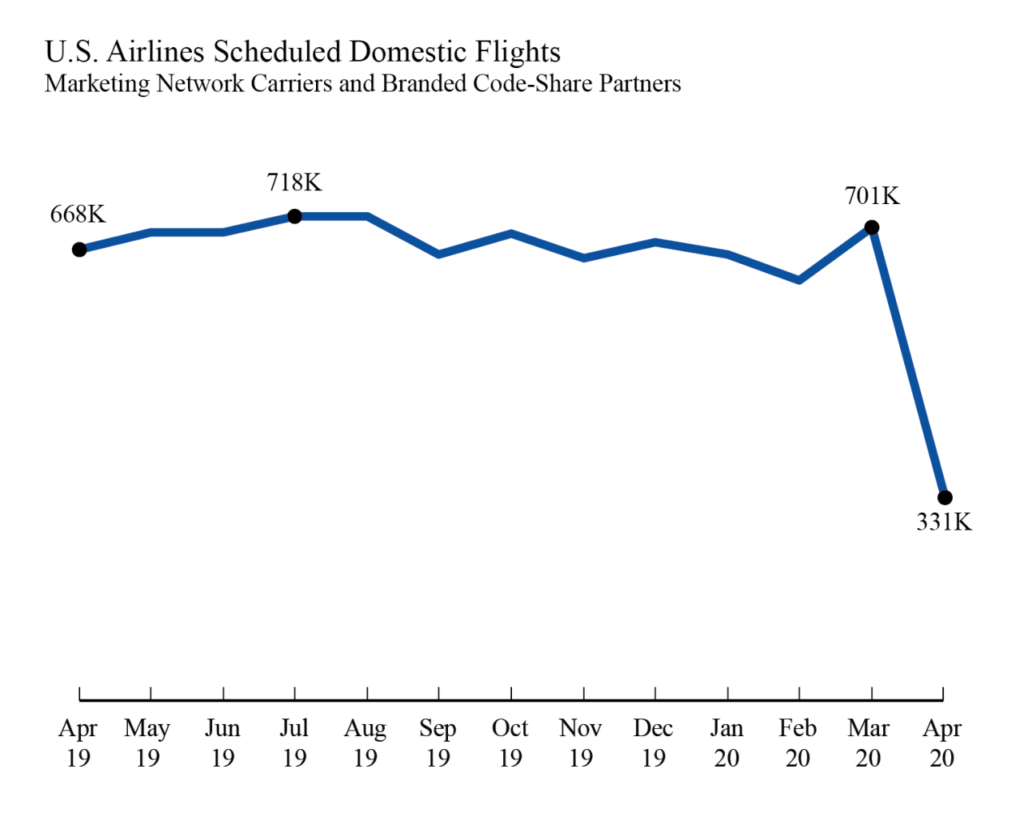 The reduction of scheduled flights was a direct response to the nation’s Coronavirus response, and lead to a direct increase in cancelations. Data from the BTS shows airlines culled a record 137,000 flights in April 2020. The cancellation rate of 41 percent well exceeds the previous records set after the attacks on Sept. 11, 2001, when airlines cancelled 20 percent of their flight schedule. 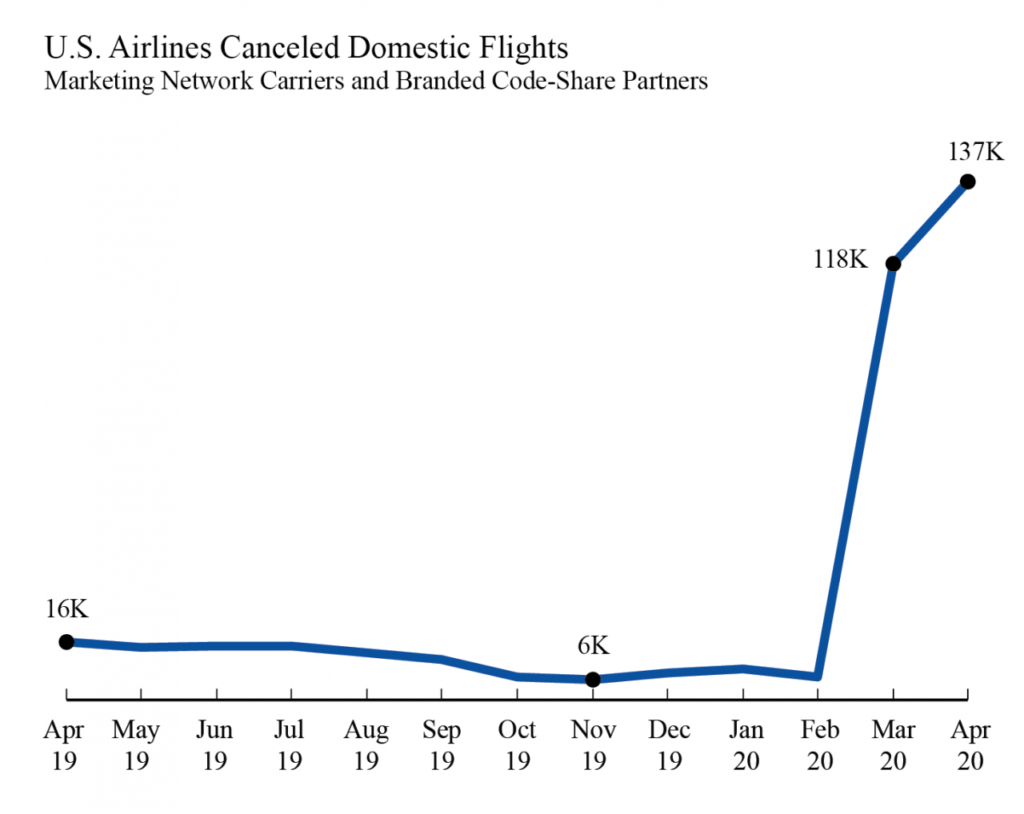 Between actual flights and cancellations, airlines set a troubling third record: the decrease in domestic airline flight operations. Over the last 12 months, American carriers operated a high of 705,000 flights in August 2019. By December 2019, that number dropped to 673,000, and lead to a gradual decrease as the world became aware of the spread of COVID-19. But in April 2020, airlines only operated 194,000 flights – two-thirds less compared to March 2020. 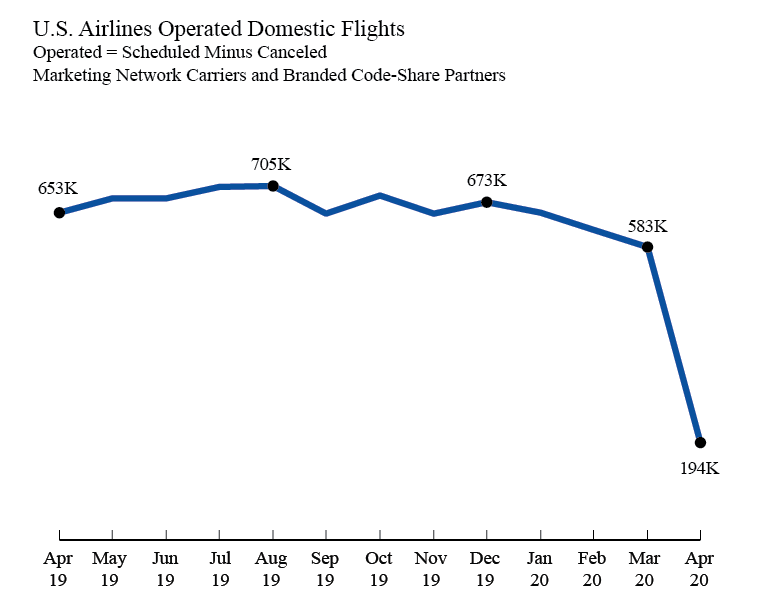 What the Reduced Schedules Mean for Airlines

As less flyers take to the skies and airlines focus on trimming schedules, companies are looking for creative ways to build public confidence and raise money. Both American Airlines and United Airlines are considering fundraising through their frequent flyer programs.

Analysts have a different idea on how to rescue the global aviation industry. A report by Frost & Sullivan suggests airlines need to start looking towards digital opportunities, and start working with stakeholders to reduce fixed costs.

“Airlines have a high level of fixed costs that negatively impact liquidity and cash flow,” the Frost & Sullivan report reads. “In this situation, airlines and airports will need to negotiate and strike new deals that enable them to reduce fixed costs. Operational costs that are variable can be kept low by optimizing resources and achieving operational efficiency with the help of digital solutions, which will also help airlines and airports ramp up operations as demand for air travel grows.”

On the other side, international trade group International Air Transportation Association is calling for government support for airlines. While they strongly suggest airlines adopt the ICAO Take Off guidelines, the organization notes that passenger numbers may not stabilize until 2021.

“[It’s] going to be a very rough rest of 2020 and probably 2021,” IATA director general and CEO Alexandre de Juniac said in comments to the CAPA Centre for Aviation. “The need for government relief measures remains urgent.”